Fecal bacteria contamination in the LaHave River Estuary has been a concern for many years. Results of the LRWP water quality monitoring program have consistently shown elevated fecal bacteria levels below the Town of Bridgewater and throughout the estuary, while sites just above town and throughout the rest of the watershed rarely exceed water quality guidelines for fecal bacteria. Fecal contamination can come from a variety of sources including stormwater run-off, malfunctioning septic systems, straight pipes, wastewater treatment plant effluent, agricultural run-off, wildlife, and domestic animals. Given the location of the contamination, the most significant sources of this pollution are suspected to be stormwater run-off and straight pipe sewage systems. There are an estimated 600 illegal straight pipes still in use in the estuary today, from below the Town of Bridgewater to the Dublin Shore.

Coastal Action works with a group of concerned residents called the Straight Pipe Citizens Group to monitor bacteria levels of the LaHave River Estuary and to educate the public about straight pipes. During the summer of 2015, the Group collected water samples from 5 shoreline locations in the LaHave River Estuary every week from June to September. These samples were tested for enterococci. While E.coli is used as an "indicator organism" in freshwater, enterococci are the most appropriate indicator of fecal contamination in marine recreational waters. Health Canada has established guidelines for recreational contact with water contaminated by fecal bacteria to protect human health.

The fecal bacteria monitoring results are in for the summer of 2015. Check out the graph below to see how fecal bacteria levels fluctuated over the summer months. As you can see, we observed several exceedances of the Health Canada Guidelines for Recreational Water Contact. ​ 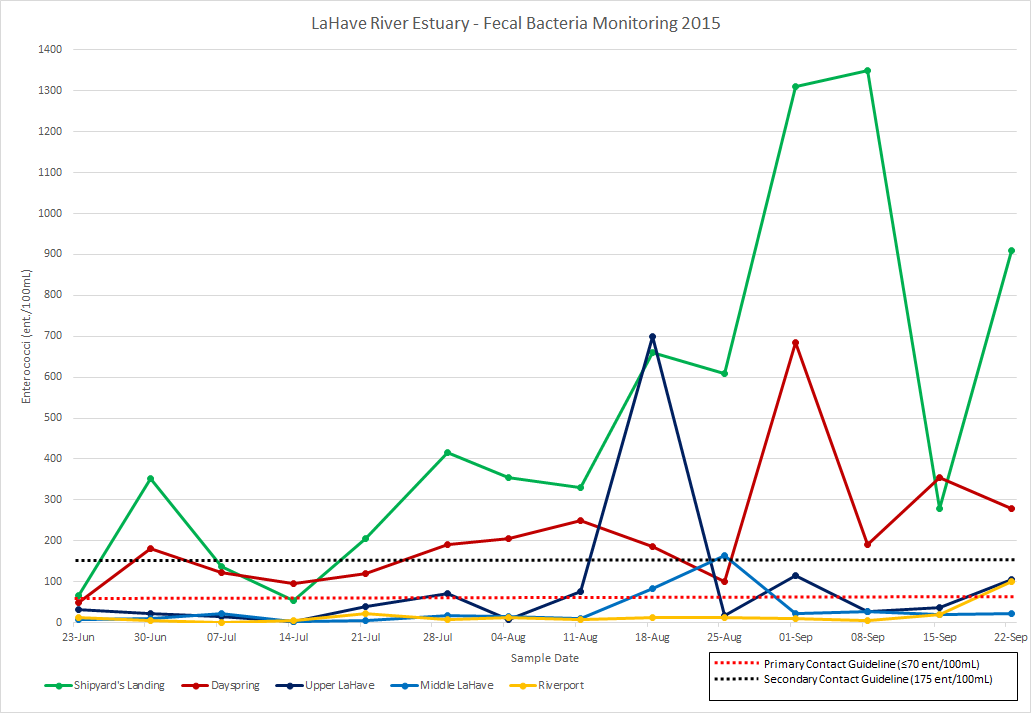 Primary Contact: Recreational activity in which the whole body or the face and trunk are frequently wetted by spray, and where it is likely that some water will be swallowed. Inadvertent immersion, through being swept into the water by a wave or slipping, would also result in whole body contact. Examples include swimming, surfing, waterskiing, whitewater canoeing/rafting/kayaking, windsurfing, or subsurface diving.

Secondary Contact: Recreational activity in which only the limbs are regularly wetted and in which greater contact (including swallowing water) is unusual. Examples include rowing, sailing, canoe touring, or fishing.